Lots has happened since the last post, and I’ve delayed writing mainly because each thing deserves its own post, and I haven’t made the headspace or had the energy to do that, but I feel compelled to write an update now, and I’ll maybe go into detail some time in the future with some of the items.

Ok, going back a few weeks: I had my lab test results back. Some things were as anticipated, and there were a few surprises too.

The highlights are as follows. The hair tests showed that as far as metal toxicity levels go, I have high levels of mercury, but extremely high levels of copper. I’d half-expected the Mercury result, as I have amalgam fillings, which can often disintegrate and release Mercury slowly into the bloodstream. I also easy a lot of fish, which can sometimes very Mercury. This is said to be a cause of inflammatory bowl diseases.

The copper, on the other hand, was a real surprise. I mean off the chart! 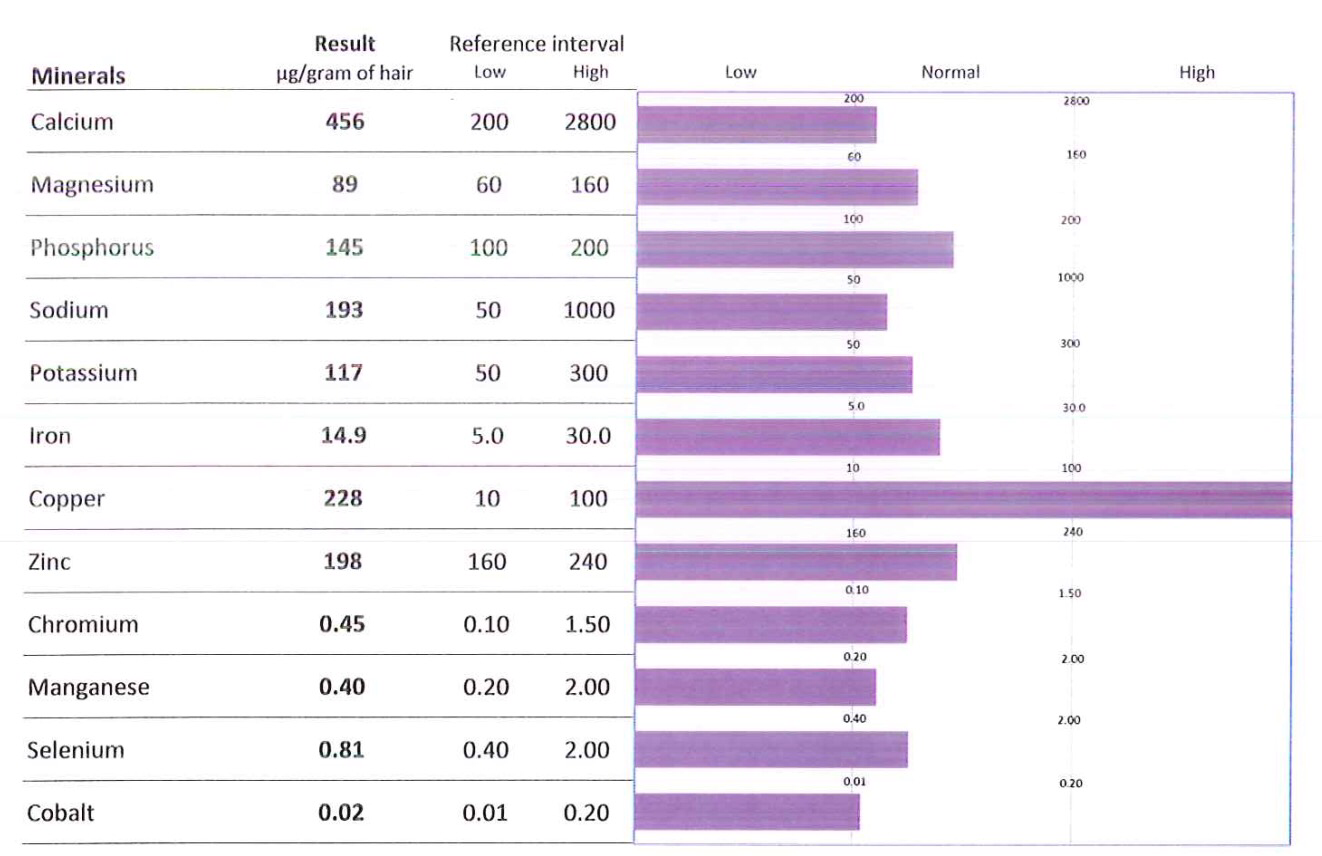 A quick google around showed me the symptoms of copper toxicity. I experienced a lot of these over the last few years as my condition worsened; irritability, mood swings, fatigue, mental cloudiness, stress. The tricky thing about copper is that it damages the adrenal glands, which are used to manage stress. If they’re damaged, then their ability to manage stress is reduced. Stress apparently reduces the body’s ability to deal with the copper, which of course then means that the adrenals are further damaged, and we find ourselves in a vicious cycle.

Copper toxicity also reduces the body’s ability to manage yeast overgrowth. So it’s no surprise, that the other off the chart result was a Candida infestation.

Candida, when it’s out of control, causes Leaky Gut syndrome, which allows foreign bodies into the bloodstream, eventually causing the body’s autoimmune system to attack itself; the core issue of autoimmune diseases, such as Crohn’s Disease and Ulcerative Colitis. Candida also causes the same mental issues as Copper. I had irritability and fatigue squared. My poor family.

Thinking back, I’m pretty sure I’ve had Candida overgrowth for years; I recognise the symptoms from way back, especially itching and a huge, unstoppable craving for carbs, as the yeast demands to be fed. My rediculous sweet tooth finally makes sense.

So, we see that there are all the pieces of the jigsaw that identify the pretty-likely cause of the Crohn’s Disease symptoms.

I was able to identify the most likely source of the copper toxicity. I just needed to take a second look at the bath, or more accurately, the blue rings around the inside of the bath, as well as the general blue tint around the base. Our natural spring water has very high copper content, carried around our house by copper pipes.

Easily solved: we bought a couple of Big Berkey water purifiers, which remove 100% of metals from water, as well as all parasites, bacteria and lots of other things I haven’t heard of. I googled around a lot to find the best and most thorough filter, and these ones appear to be the best. You can buy them from the European distributor here.

As usual, there’s also a diet change to enable the body to eliminate the excess copper. Zinc, Magnesium and Vitamins B6 and B12 are the most important nutrients involved here. Their best source? Meat. In fact, the most repeated advice I’ve read in all the Copper detox articles I’ve read is simply “Don’t be a Vegetarian”. Bone broth and a couple of bowls of chicken soup while I was in hospital aside, I’ve been a pescatarian for over twenty years, and haven’t eaten red meat for even longer. It’s been difficult ordering organic chicken and grass-fed beef, and emotionally challenging to eat it, but I have to admit that I could feel my body really wanting, needing it. So there it is for the moment. I’m in survival mode, so I have to put my morals and preferences aside for a while.

The Candida also requires a diet change, but it’s not a dramatic change to my previous diet – no carbs. That means no wheat, grains, starchy vegetables or sugars of any kind, not in fruit, not in various alternative forms. This is because the yeast requires these cards – which convert to glucose in the bloodstream – as sustainance. Removing the carbs starves the yeast, bringing it under control. It’s a little more complicated than that, and this website appears to have lots of info about it if you want to know more.

There are also various natural anti-fungals you can take to aid the detox process. A popular one is a herbal tea named Pau D’Arco. I drank a cup a day for a couple of weeks.

I had some serious cravings over the first few days, but I’m through that now, pretty much.

As the body kills off and eliminates these toxins, you suddenly get all of these bad things flowing through you on the way out. This is known as ‘die-off’, and it can get pretty nasty. Flu-like symptoms, fatigue, irritability, headaches, nausea and sometimes inflammation can rear it’s head.

This die-off leads me to the next section of my story. I had it pretty bad for a few days, but was happy that it was a sign that the diet and herbs are doing their work. But there’s a chance that they did their work too well, or at least a little too quickly, and released too many toxins at once – more than my body could handle – as the infection with the fistula started to  worsen, and I started to get loose stools with blood, and more recently, just blood, released pretty painfully by my cramping, spasming bowels. Yes, a combination of the die-off, some late nights, a five day music recording session and my inadvertently eating broth that had gone off, all seem to have lead to another Crohn’s flare-up.

My GP today gave me a new course of antibiotics to reduce the infection and hopefully some of the soreness I’ve been experiencing – it’s pretty painful to sit down for any length of time – but he’s also referred me urgently back to the surgeons tomorrow so that they can see if the infection is more deep-rooted. I’m praying they’ll give me some kind of scan as opposed to a more hands-on physical examination – I’m too sore for that.

So, wish me luck, and I’ll post an update as soon as I have one.