I’m going to write a full post about the last seven months since my last post – I’ve learnt a huge amount, and there are definite reasons for my new-found health; I’m feeling so much better than i was – but I’m going to focus in this post about just one aspect of my healing journey, as it’s so very unusual to our culture, that I think it might be interesting to a lot of readers; I’ve certainly found it really fascinating!

What a ride it’s been. I write this feeling better than I have done in many months; I’m back at work nearly full time after being off work and often bedridden for most of the year, and most of my symptoms are either gone completely, or greatly reduced. I feel like ‘me’ again.

As I started to slowly regain my energy after the second flare-up in May (I’ll talk about that in my next post), I was approached by a dear friend, Jerry Freeman. Jerry is a long term practitioner of advanced Transcendental Meditation techniques, taught to him by Maharishi Mahesh Yogi. As such, his knowledge and interest in vedic texts, culture and practices is profound. There’s a great interview with Jerry on the Buddha At The Gas Pump website, which I thoroughly recommend for a really interesting talk on such things.

Jerry was kind enough to offer an Astrological reading for me – he practices Jyotish Astrology; an ancient type of astrology, said to be more accurate and specific than the more traditional type that we regularly come across. Jerry felt that this type of Astrology may help to uncover some more planetary aspects of my illness, which we might then seek to resolve. 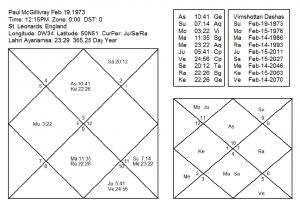 The reading with Jerry was really fascinating. My Jyotish chart listed the specific dates that were the turning points in my illness, from my initial flare-up, to entry into hospital, to recovery, to the second flare-up; all there on paper, sent to me before my consultation. The reading also showed several specific planetary alignments that are said to cause digestive problems. As Jerry said, I didn’t really stand a chance, according to my chart!

Jerry recommended that I place various ‘Yantras’ (sacred geometric designs that are created to influence specific planets) around my house, to balance out the energies that these planets were disturbing. He was also able to advise me on small rituals that I could perform to help balance the energies.

He also recommended that I arrange for someone to perform a series of Puja’s; these are ancient Hindu rituals, which are intended to communicate with the energy of deities, and purify the energy, facilitating healing and resolution of problems. Jerry recommended that I speak with Pandit Sharma.

Pandit Sharma is is a Maharishi Vedic pandit and TM teacher who works in a small temple in Gurgaon, in the state of Haryana, about 20 miles from New Delhi. He received TM teacher training in 2007 at the Brahmasthan of India.

He leads a small group of Vedic Pandits – ‘Pandit’ means Hindu Scholar or priest – , who perform regular Puja’s to help people all around the world with various issues and problems.

This was a very new experience for me, and it took me a little while to understand exactly what it was that Pandit Sharma did that Jerry was recommending! The culture is so very, very different to our western culture, but as it was explained to me, it just felt right, and I had to know more.

Pandit Sharma consulted my chart, and agreed with Jerry on the meaning of the planetary positions, while offering further insight into the use of Yantras and also Jyotish gems, which can also help to balance the energies. He also arranged for a group of Pandits to perform a five-day Puja on my behalf, to aid my recovery and healing. I had no idea that these men would be performing the Puja for so long, and was very touched at their devotion to their work.

In return, I would make a small Dakshina (donation) to support their work and living, which I was happy to make, whether the Puja worked or not – at the very worst, I would be offering a little financial support to a group of well-meaning spiritual men in a poverty-dense country; a group of men dedicated to making the world a better place. Feels good. 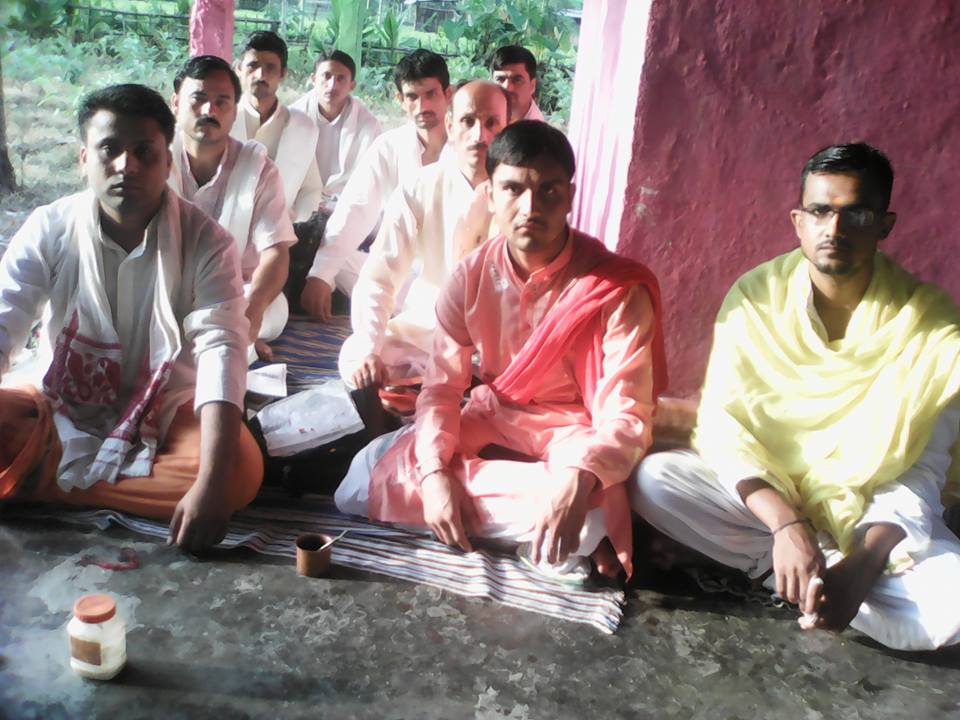 Pandit Sharma and the other Pandits gathered at the start of the Puja for my healing.

The Puja consists of various rituals, where offerings are made to the relevant deities, while mantras are chanted. As the Pandits are advanced in Transcendental Meditation, my understanding is that things were happening on a transcendent level too, which is beyond my understanding, but nice to know.

Several times during the Puja – which happened in August- Pandit Sharma contacted me via Facebook Messenger, and sent me audio clips of the mantras being recited – it was incredible to hear these holy men on the other side of the world, describing my situation and reciting phrases intended to help me. So different to our western culture, so fascinating.

Now, I have to be honest, I can’t for absolute certainty know what the effect of the Puja was – I’m taking many treatments and doing many therapies as part of my recovery. But, I must say that within a couple of weeks of the rituals, I experienced a real lift in my health, energy and spirits, which lasted some time. 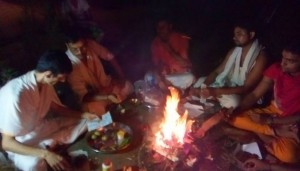 The Pandits performing a Puja

Pandit Sharma said that the effects of a Puja are usually felt after two or three months, and I write this three months after the rituals; I’m back at work, and many of my symptoms are gone; I’m feeling so much better, and feeling very positive that I am on my way to complete remission. Again, I have no way of telling how much the Puja’s affected this, but it feels right that things are flowing more – I felt almost guided to the diet that I am on that is making so much difference to my health, and yes, I just feel like I’m on the right path. I also believe in the power of intention; for five holy men to spend all that time praying for my health, that must make some real positive change on some level.

Pandit Sharma is open and very willing to organise these Puja’s for all who ask; he and his group live and work for the healing of the global community, and I encourage you to get in touch with him to to find out more if this feels right for you; the Puja’s can be done for healing of illness, or for the resolution of life situations. We have kept in touch since the Puja’s, and he’s often enquiring after my health, making sure that I continue on the right track.

I feel very blessed to have met such a kind and devotional and sincere man, and feel blessed for the work that he has done for me. And what an amazing experience.